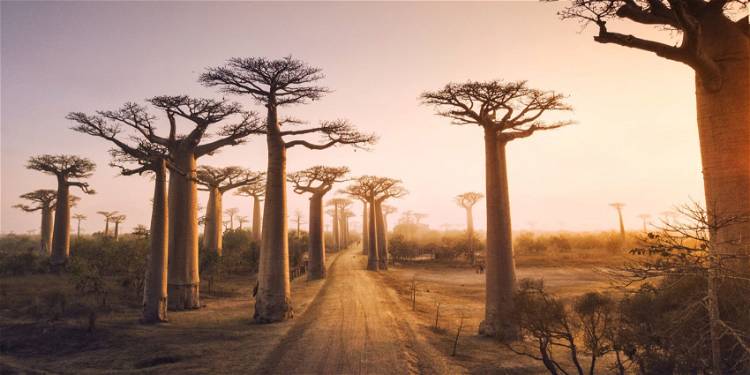 Earth's greatest nature project, Madagascar has evolved in relative isolation from the rest of the world, making this home to a plethora of unique and otherworldly creatures.

Having separated from the Indian subcontinent approximately 88 million years ago, Madagascar is the oldest island in the world, its enormous size earning it the nickname "the Eighth Continent". Known for its diverse culture, the remarkable Avenue of the Baobabs, and its extraordinary biodiversity - most notably with its endemic species of lemur - Madagascar will certainly delight all wildlife enthusiasts who come and explore its vast national parks, rainforests, and spiny forests.

For those looking to spot indris in the wild, one of the largest living lemurs, then be sure to include a visit to Andasibe-Mantadia National Park on your luxury Madagascar holiday, located east of the capital Antananarivo. Heading further south to the Mandrare Valley, expect to see ring-tailed lemurs and Verreaux’s sifaka, known as the ‘dancing’ lemur due to its unique way of moving across the ground.

Madagascar’s tropical northern coastline, with its white, sandy beaches and turquoise water, is home to several coral reefs, making this an ideal destination for snorkelling and scuba diving. Madagascar also offers incredible opportunities for whale watching, with migrating humpback whales visible off the coastline of Ile Saint Marie between July to September, and whale sharks in the Nosy Be archipelago between September to December.

The fourth largest island in the world, Madagascar’s size is not to be underestimated, its landscapes ranging from arid deserts to lush jungles. Our Africa specialists will recommend what particular areas you should visit on your luxury Madagascar holiday, hand-picking the best hotels and lodges according to your interests. Whether you’re looking for luxury Indian Ocean beach escapes, guided lemur spotting tours, or cultural interactions with local communities, your Madagascar itinerary will be tailor-made to suit you. Speak to us about your luxury Madagascar honeymoon, or what to expect on an adventurous family holiday to Madagascar.

As a general rule, the best time to visit Madagascar falls within April and December as the weather is consistently excellent; you can expect warm and sunny weather. July to September is the country's peak period, and is also the best time for viewing humpback whales.

Naturalists will delight at this 12-night tour to Madagascar’s biodiverse southern region - a place rich with wildlife and wonders you won’t find anywhere else on Earth.

This 10-night Madagascar tour takes you from the wildlife-rich south to the north-western tropical island of Nosy Komba.

The Best of Northern Madagascar

Explore the best of Madagascar's beautiful North on this 9-night itinerary, with lemur spotting, Tsingy hikes, and tropical beaches...

Things to do in
Madagascar
Lemur Spotting

There are over 100 species of lemur in Madagascar, all with long, furry tails to help their balance as they jump from tree to tree; the most notable of these is the ring-tailed lemur, with its distinct black and white striped tail. The exception is the Indri, the largest living lemur, which, unlike other lemur species, only has a small tail and leaps vertically through the trees.

Madagascar's lemurs have adapted remarkably to the varied climates and terrains of the country, so wherever you go, it's likely that you'll be able to spot these playful primates, whether that be in tropical rainforest or the desert.

Whether you're a beginner or an expert, many beach resorts in Madagascar offer scuba diving classes and excursions, which is the the best way to explore the country's diverse marine life.

On dedicated whale watching cruises between the months of July to September, you'll have the opportunity to spot humpback whales as they bathe in the warm waters surrounding Ile Saint Marie.

For those looking to encounter whale sharks, visit the beautiful Nosy Be archipelago between the months of September and December, where you'll have the opportunity to snorkel with these unique creatures.

Avenue of the Baobabs

Venture to the stunning Menabe region of western Madagascar and gaze upon the mighty silhouettes of the iconic Barobab Trees that line the vibrant red Madagascan road.

We recommend visiting this wondrous avenue at sunset or sunrise, as the trunks change colours and the incredible shadows of the trees are most prominent.