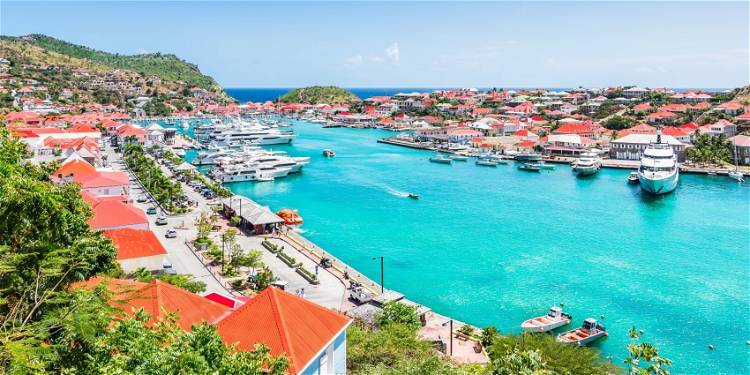 Playground to the rich and famous, St. Barths exudes the glamour and sophistication of the South of France, earning the island the nickname "the St. Tropez of the Caribbean".

Characterised by its breathtaking white-sand beaches and chic, European atmosphere, St. Barths has earned a reputation across the world for its exclusive boutique hotels, elite visitors, and mega yachts that frequent the harbour of Gustavia, the island's capital. Discovered in 1493 by Christopher Colombus, this small, volcanic island holds a remarkable beauty that captivates all who visit. Whether you're visiting one of its 17 picturesque beaches, encountering diverse marine life or exploring its French-Creole culinary scene, St. Barths has a unique culture and history that is undeniably charming.

To enjoy the most sunshine, with a very low chance of rain, St Barths is at its best from December through to April, with average highs of 29°C. However if you like your holidays steaming hot then St Barths is warmest from May to September, at 32°C, but there is a higher chance of rain, with the official rainy season running from September to November.

SPEAK TO OUR CARIBBEAN SPECIALISTS
Speak to one of our experts to find your perfect trip!

The best time to go to St Barths is between December to April when the weather is warm and sunny. Avoid travelling between the months of June and November which is the region's hurricane season.

Located within a protective bay, Grand Cul de Sac Beach is a calm and shallow lagoon famed for its remarkable beauty and ideal conditions for water sports. Teeming with marine life and coloured with shades of blue and green, Grand Cul de Sac offers a variety of unique and exciting activities to enjoy.

Characterised by red rooftops that peer above tropical forestry above the glistening Caribbean ocean, Gustavia is St. Barths glamorous and lively capital. Famous for its boutique-lined streets and home to some of the best restaurants in the Caribbean, Gustavia is a must-see on any Caribbean holiday.

Hidden gems of the island, Grand Fond and Petit-Cul-de-Sac are St. Barthes' only natural pool formations. Situated off the island's southeastern coast, the natural pools are often disguised between rock formations and sand trails, making them difficult to spot and consequently, fairly unknown. While we recommend always consulting an expert guide, swimming in the natural pools is a delightful and rare experience.

One of the island's most secluded, Colombier Beach is best known as a gateway to the marine life-rich cape of L'Ane Rouge and as one of the island's least visited beaches. Inaccessible via public roads, Colombier Beach can only be reached via boat from the port of Gustavia or on foot from Petite Anse, so those who venture out can enjoy the beach almost to themselves.