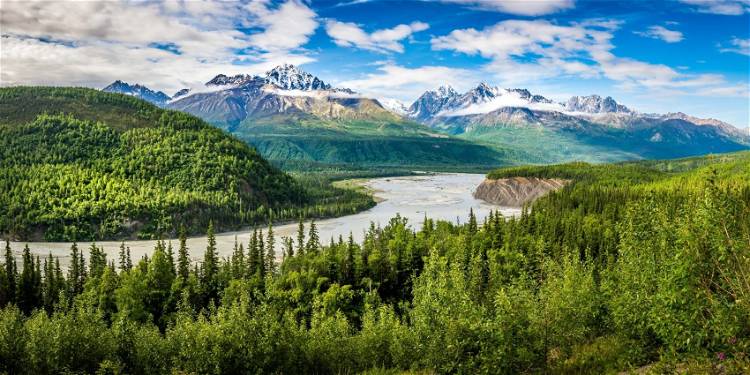 Alaska's dramatic landscapes, as varied as they are vast, encapsulate the immaculate beauty of the American wilderness.

Surreal in their beauty, the immense landscapes of Alaska comprise vast forests, glacial rivers and verdant rolling hills that lapse into towering snow-capped mountains. Offering adventures not found anywhere else in the USA, a journey to Alaska could see you whale spotting on a riveting tour off the coast of Juneau, kayaking amidst colossal glaciers in Kenai Fjords National Park or camping beneath the Northern Lights in Fairbanks.

Home to a diversity of terrestrial wildlife, hundreds of migratory bird species and an abundance of elusive marine life, Alaska is North America's premier wildlife destination. Spot grizzly bears, wolves, moose, caribou, and Dall sheep, known as Alaska's Big Five, in the country's inner wilderness region of Denali National Park. For those looking to spot as many species as possible, Chugach State Park, one of Alaska's most accessible parks, is renowned for its density of land mammals with over 45 species found throughout. Alaska's coastal waters are best explored on a luxury cruise; visit the majestic landscapes of Prince William Sound with towering glaciers, forested hillsides, sublime mountain ranges and pristine islands inhabited by bald eagles, orcas, Stellar sea lions, harbour seals and sea otters. Resurrection Bay in Kenai Fjords National Park is one of the country's best whale watching locations, with orcas, fin whales and grey whales frequently sighted.

Experience Alaska's indigenous heritage and thriving urban culture in Anchorage, the state's largest city, which has a number of outstanding museums, including the Alaska Native Heritage Center, and is near Chugach State Park. The state capital, Juneau, is known for its modern dining and nightlife scene, while the remote villages inhabited by small communities exemplify the warm hospitality that characterises Alaska's rural areas.

The best time to visit Alaska is during the summer months, between June and September, when the days are longest and the weather is warmest.

Best Time to travel to
Alaska

The best time to visit Alaska is during the summer months, between June and September, when the days are longest and the weather is warmest.

Things to do in
Alaska
Private Whale Watching

Explore the rich marine ecosystem of Alaska's coastal waters on a private whale watching excursion showcasing a diversity of whale species. Resurrection Bay in Kenai Fjords National Park is one of the most reliable locations In North America for whale watching, with common sightings of orcas, humpback whales, fin whales, grey whales and Minke whales occurring all year round, as well as otters, harbour seals, Stellar sea lions, bears, puffins and bald eagles.

Exit Glacier, located in Alaska's Kenai Mountains, is a fantastic destination for those looking to get up close and personal with Alaska's majestic glaciers. The Exit Glacier Overlook Trail is the easiest way to get to the glacier, with a flat, scenic route that leads through gravel plains, flourishing forestry, and the tranquil Exit Creek to the glacier's toe. More experienced hikers may prefer to take the Harding Icefield Trail, an ascending trail that runs parallel to the glacier's north edge and offers rewarding panoramic views of Exit Glacier, the sprawling Harding Icefield, and the tidewater glaciers on the outer coast of the Kenai Fjords.

Explore the ethereal landscapes of Prince William Sound on an enthralling kayaking excursion through its calm waters. This breathtaking adventure provides a unique vantage point to view the exquisite scenery of towering glaciers and snow-capped mountains set against blue waters and verdant terrains, as well as a plethora of wildlife sightings ranging from whales and land mammals to hundreds of sea bird species.

Located in the Juneau Icefield, the Mendenhall Ice Caves are a series of passageways cradled within the Mendenhall Glacier - a spectacular natural wonder that entices visitors with its otherworldly appearance. Entered via land or water, a trek through the caves will see you pass through mesmerising crystalline blue tunnels, a truly once-in-a-lifetime sight.

Spot the most sought-after of Alaska's wildlife species, known as the 'Big Five' on an excursion to the Denali National Park. A tour along the Denali Park Road, best accessed by bus or helicopter, will take you through low valleys, elevated forests, snowy mountain passes, and glaciers, where you'll have the chance to spot moose, grizzly bears, Dall sheep, caribou, and the elusive grey wolf.

Set amidst luscious forestry and the majestic peaks of the Chugach Mountain Range, Girdwood is a charming resort town located just a half-hour from Anchorage. Whether you're after an exciting day trip or a weekend getaway, a trip to Girdwood offers a plethora of engaging activities, from nature walks to the scenic Virgin Creek Falls, hiking Mount Alyeska, marvelling at the regional scenery on a ski lift ride and touring the local dining scene.