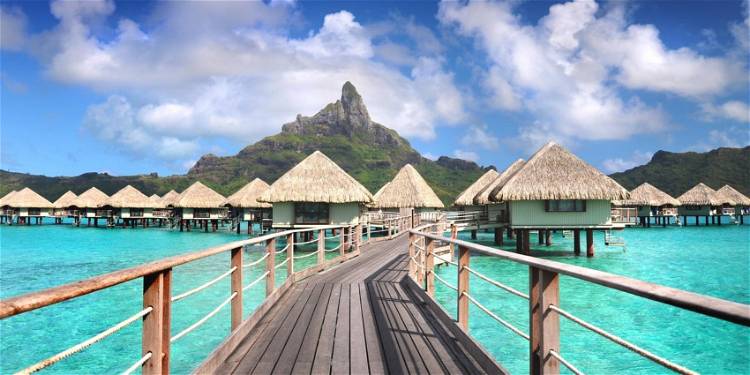 Call our experts
We're open today until
+16468465208
LET US CALL YOU
Arrange a convenient time for you
TELL US YOUR PREFERENCES
We'll find the perfect solution for you
Categories
Pacific IslandsCouplesFrench PolynesiaBora Bora
Everyone has heard of Bora Bora. Perhaps the most famous island getaway in the world, the mere mention of its name conjures up vivid images of white sandy beaches, turquoise lagoons and snorkelling amongst millions of brightly-coloured tropical fish. Yet for many of us, the story ends there. So, in the interest of getting to know this tropical paradise just a little bit better, here are some little-known facts about the island that we all dream of visiting one day.
BY Emma Hookway
Luxtripper Travel Editor

I can't wait to pack my bags and jet off to Bora Bora!

How Beaten Are The Paths?

1) Hawaii gets more visitors in ten days than Bora Bora receives in an entire year. Only a very lucky few have the opportunity to visit this exclusive island paradise, and they can expect a truly luxurious experience.

Staying at Conrad Bora Bora Nui in a King Sunset View Overwater Pool Villa, you'll feel like a true VIP; think sunset seclusion, tranquil midnight swims in your private infinity pool and steps leading directly into the lagoon. From private picnics on Motu Tapu to stand-up paddle boarding in the lagoon, the resort is your gateway to the beautiful paradise of Bora Bora.

Whats in a Name?

2) The official language in Tahiti is French, but many locals speak Tahitian. With only 13 letters and 1,000 words, Tahitian may seem an easy language to learn; and whilst you’re sure to pick up a few words during your visit, the slight variations in spelling and the fact that the same word can be used in many contexts means that this beautiful language is deceptively difficult. If you're on a holiday to Bora Bora, we recommend learning a few phrases before you go to impress the local people - once there, make sure to head into Vaitape, the island's largest town, where you can practise your Tahitian lingustic skills! Don't worry if you didn't have time to learn the language; Conrad Bora Bora Nui offers Tahitian language classes.

3) It will come as shock to discover that we've actually been pronouncing Bora Bora incorrectly for decades. There is no “B” in Tahitian, so the island’s actual name is Pora Pora, meaning “first born”. Westerners misheard the name as “Bora Bora” and it stuck! Now synonymous with paradise, Bora Bora is the dream honeymoon destination, an island paradise seemingly plucked straight from your imagination!

We've all heard of the Pacific Ring of Fire, and whilst people commonly think of the dramatic volcanic activity of Hawaii, French Polynesia's unique landscape has also been formed by the bubbling of molten lava beneath the Earth's crust.

4) Bora Bora is actually what remains of the caldera of an extinct volcano which erupted 3 to 4 million years ago. This unique geography is best admired when arriving by plane, and consists of a ring of small islands along what used to be the rim of the volcano. Bora Bora's volcanic history has been disguised by the lush, tropical flora that covers its dramatic peaks - its easy to see why Bora Bora is likened to the Garden of Eden!

5) Bora Bora is an instagrammer's dream, its turquoise lagoons and white sand beaches are unlike anywhere else on Earth. One of these Instagram wonders is Motu Tapu, a small island located one hundred metres off the coast of Bora Bora. The most photographed island in the world, the island is owned by the Conrad Bora Bora Nui Resort & Spa, which offers exclusive packages for its guests to visit the island.

6) As well as this, Bora Bora is home to Matira Beach, often considered to be the most beautiful beach in the world. The king of all beaches, Matira Beach is a natural paradise, its swaying palm trees, powdery sands and crystal-clear water akin to a picture from a magazine. Whether you want to swim, sunbathe or take a stroll across the sand, your eyes will be in heaven as they feast on the beauty surrounding them.

Whats it Known For?

7) Bora Bora really is a natural paradise, and this is reflected in the produce available from the island. Known for producing black pearls, Bora Bora's pearls are extremely rare and very beautiful. They’re also very expensive – a necklace made of black pearls can cost up to $50,000. If you're looking to shop for these precious stones, you can visit the bustling Papeete Market whilst staying at Le Tahiti by Pearl Resorts, purchasing some exotic souvenirs as a token of your French Polynesia holiday.

8) Feeling thirsty? The main produce of the Bora Bora is coconuts, so you can expect to drink plenty of cool and refreshing coconut water during your visit. During many events and excursions, guests are taught how to open a coconut with no tools, including in the Conrad Bora Bora Nui's "How to Open a Coconut" cultural activity.

9) Although one of the most remote locations in the world, Bora Bora didn't escape the conflict of the Second World War in the 20th Century. During World War II, the United States used Bora Bora as a military supply base. History buffs can still visit the “Guns of Bora Bora” – seven giant cannons that served as military defence against the Japanese.

Being slap-bang in the middle of the Pacific certainly does have its advantages. Beneath the waves in Bora Bora there are cities of effervescent life, coral reefs showcasing brightly-coloured fish and circling reef sharks. Whether you're an avid scuba diver or a beginner snorkeller, you can don your fins and snorkel and discover this underwater paradise.

If you'd like to visit Bora Bora on your next far-flung adventure holiday (who wouldn't?), contact one of our Luxury Travel Specialists today who can tailor-make your perfect French Polynesia holiday!