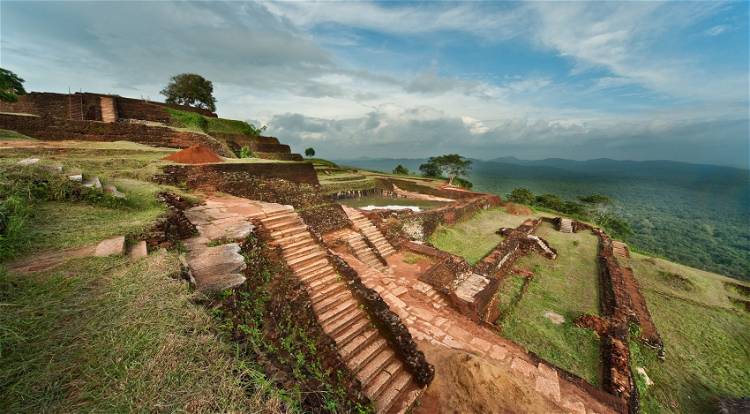 Call our experts
We're open today until 8pm
+16468465208
LET US CALL YOU
Arrange a convenient time for you
TELL US YOUR PREFERENCES
We'll find the perfect solution for you
Categories
FamilyClose FriendsWorld HeritageSoloCouplesIndian OceanCultureSri Lanka
Only the very best historical sites are awarded the coveted UNESCO World Heritage Site title, and Sri Lanka proudly boasts 8 of them. This “Pearl of the Indian Ocean” is rightly proud of its plethora of World Heritage sites, each of which are intrinsically linked to the islands spiritual links with each of its 4 major religions; Buddhism, Christianity, Hinduism and Islam. The sites themselves are an eclectic mix of both physical beauty and cultural importance and we hope reading about them will inspire you to visit them on your next trip to Sri Lanka.
BY
Luxtripper Travel Editor

Located 148km to the east of Colombo the cave temples at Dambulla are without a doubt one of the most visually impressive World Heritage sites on Sri Lanka. There are more than 80 caves in total with the 5 main ones boasting a multitude of revered paintings and statues. You will find here three statues of past kings of Sri Lanka, four statues of different gods and goddesses and no less that 153 statues of Buddha.  The is site is Sri Lanka's best preserved cave temples and the murals within the complex cover an area of approximately 2100 sqm in total.

The  Central Highlands of Sri Lanka consist of three areas of environmental significance; the Peak Wilderness Protected Area, the Knuckles Conservation Forest and the Horton Plains National Park. Designated as a UNESCO World Heritage Site in 2010 thanks to its spectacular biodiversity one of main attractions to the Central Highlands can be found in Horton Plains. This is the globally famous World's End; a sheer abyss that is one of the most photographed spots in Sri Lanka.

The Sacred Tooth Relic at Kandy is one of the world's most sacred Buddhist icons. Located within the Temple of the Tooth in the royal palace the tooth itself is said to have belonged to Buddha himself and is thus revered by Buddhists across the globe. It is believed that whoever is holding the relic at the time actually holds Sri Lanka's governance. Few realise that it is not only the relic but the entire town of Kandy which UNESCO decreed as a world heritage site,  largely due to the presence of both the Temple of the Tooth and the relic which resides inside it.

Declared a Biosphere Reserve in 1978 11 years before being given World Heritage site status, the Sinharaja Forest Reserve is essentially a national park which has international importance.  The name translates to 'Kingdom of the Lion' and is where a myriad of endemic species call home. These include a massive populations of leopards and despite its concentration of fauna and flora the density of the jungle makes it incredibly difficult to spot wildlife.

Anuradhapura was not only Sri Lanka's original capital but the first ancient capital of the country.  Today the city, which sits around 200kms to the north of the modern capital Colombo, is a hub of history, culture, spirituality and religion.  Here you will find the most impressive ruins from the Great Sri Lankan Civilisation, considered by many experts to be one of the greatest in history. 40 sqkms of the area surrounding the city is covered by monasteries and do to their presence Anuradhapura is considered sacred to the Buddhist religion.

King Vijayabahu I declared Polonnaruwa Sri Lanka's capital in 1070 CE and it is the  country's second oldest kingdom. The entire area boasts a collection of impressive ruins from the ancient kingdom, the most spectacular being the Royal Palace which is home to an array of amazing timeworn columns.

Widely considered to be the 8th wonder of the world,  a visit to Sigiriya is always something special.  Home to an ancient castle which dates back to the 5th century AD, the Sky Palace which is located on top of a rock, the Mirror Wall, the Lion Gate and the world famous Sigiriya Frescoe's, it is little wonder that this site is the most popular choice amongst those who want to take a step back in time to the ancient world.

Situated on the most south-western tip of Sri Lanka,  the beach town of Galle is home to a quite magnificent fort making it south Asia's finest example of a Portuguese built fortified city. In later years fortification took place by both the British and Dutch who's influences give the town a distinct romantic look and feel to it. This is still in evidence today despite the town being devastated by the 2004 tsunami.

Wherever you are staying in Sri Lanka you will have at least one of these World Heritage sites within easy travelling distance so take time out from indulging in the magnificent environment you are holidaying in and visit one of the following. You will be very glad you did.