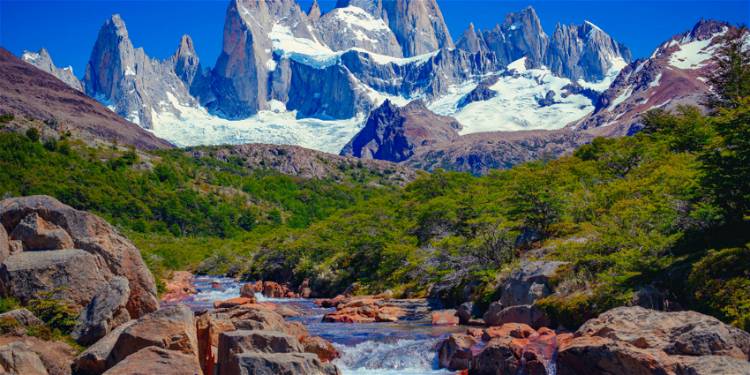 Embrace all Argentina has to offer on this all-encompassing 12-night itinerary showcasing the country's spectacular highlights. Spend a few days touring the capital city of Buenos Aires before retreating to the idyllic Lake District for a stay in Bariloche. Embark on a captivating adventure across the immaculate wilderness region of Argentina's Patagonia, sample some of the finest wine in the continent in Mendoza, and visit the world-famous Iguazu Falls.

Welcome to Argentina - your adventure begins in Buenos Aires, the nation's bustling capital city. Upon arrival, you'll be greeted by your driver and transferred to your accommodation for the first two nights.

Nestled in Buenos Aires’ stylish Palermo Soho neighbourhood, Nuss Buenos Aires Soho is an exclusive boutique hotel occupying an excellent location mere moments away from an array of restaurants, bars, shops, and museums. Boasting bright contemporary-style accommodation, an on-site pool and dry sauna, and a rooftop terrace, the hotel provides everything you may need to rejuvenate after your long flight.

On a tour of the city's highlights, explore the enchanting streets of Buenos Aires. Your dedicated guide will guide you through Buenos Aires' most notable monuments, from the exquisite historic districts and grand squares of San Telmo and Plaza de Mayo to the bustling Avenida de Mayo and spectacular Metropolitan Cathedral.

Add a dinner and tango performance to your itinerary for an evening steeped in local culture, a terrific way to sample regional cuisine while also witnessing one of the country's most iconic cultural staples.

It's time to trade soaring skyscrapers for sublime mountainscapes as you say goodbye to Buenos Aires and move on to the next stop on your itinerary. Meet your driver after you've checked out of the hotel for a transfer to the local airport and begin your journey into Argentina's idyllic Lake District.

Encircled by the Andes, Llao Llao Hotel is an exquisite lakefront hotel benefitting from awe-inspiring views of the surrounding scenery. Characterised by an elegant design of refined opulence, the hotel boasts cabin-inspired accommodation featuring luxurious decor, world-class amenities and floor-to-ceiling for optimal viewing of the lake and mountains.

Bariloche, a Swiss ski resort noted for its beauty and charm, feels like a piece of Europe in Argentina. Spend a day exploring the town's narrow streets, which are lined with world-class chocolatiers, boutique stores, classic Swiss eateries, and inviting alehouses.

Venture out just beyond the town and explore the luscious landscapes of Nahuel Huapi National Park on a captivating cycling tour.

Prepare to discover another of Argentina's wilderness regions as you check out of the hotel and meet your driver for a transfer to the local airport. From there, you'll depart to El Calafate, the gateway to Los Glaciares National Park.

EOLO - Patagonia's Spirit is a secluded luxury hotel surrounded by nothing but the expansive terrains of the Patagonian steppe. Boasting a bucolic country-house style, the property exquisitely combines a classic design with modern touches, with each room benefitting from magnificent views of the surrounding environment.

Take in the mesmerising vistas of the Patagonian steppe on an enthralling horse riding adventure. Beginning at EOLO's stables, departing from one of two routes: ascend the slopes of Cerro Frías with rewarding views of the immaculate plains, or ride to the Flamingos' lagoon to glimpse these bright-pink birds frolic in the water.

The following day, you'll visit one of the most impressive glaciers fed by the Southern Patagonian Ice Field, Perito Moreno Glacier. An incredible natural wonder, the glacier spans 30km in length and with a total area of 250 sq km, making it the world's third-largest reserve of freshwater. Whether you choose to descend the hillside bordering the glacier, trek through the icy terrains or get up close on a boat ride, the view will undoubtedly inspire awe.

Home to a diverse array of bird species, the Patagonian steppe is a fantastic location for birdwatching. Venture out with an expert guide and try and spot as many species as possible, with everything from pink flamingoes and woodpeckers to the Andean condor found circling the skies here.

It's time to move on to the next leg of your journey after an unforgettable adventure in Argentina's Patagonia. After checking out of your accommodation, your driver will meet you and transport you to the local airport for a flight to Argentina's picturesque wine region.

Exquisitely designed in harmony with the region, Cavas Wine Lodge is a remarkable luxury lodge boasting exclusive access to Mendoza's wine valleys. With world-class amenities including spacious suites built with natural materials, private outdoor seating areas, an outstanding restaurant, and an excellent spa, the lodge provides guests with an unrivalled luxury experience at the foot of the Andes.

Mendoza is Argentina's largest wine area, with over 1500 wineries producing a wide range of wines, including the world-famous Malbecs. Spend a whole day touring this gorgeous region, learning about the various methods and techniques required to create the perfect bottle, and practising the steps involved in wine tasting. Finish with a delectable gourmet lunch at one of the region's leading wineries, along with some of the region's finest wines.

Your final destination in Argentina awaits you. Meet your driver after you've checked out of the hotel and prepare to witness one of the world's most incredible natural sights as you depart for Iguazu. Upon arrival, you'll be greeted by your driver and transferred to your accommodation.

Engulfed by lush tropical forestry, Awasi Iguazu is an extraordinary luxury lodge boasting a rustic cabin-style design. Providing a truly immersive experience in the heart of the rainforest, each suite at the lodge enjoys panoramic vistas of the surrounding environment and features a private pool and terrace.

Iguaza Falls, the park's crown gem, is one of the most popular natural attractions on the continent of South America. On an excursion up the falls, you'll get the opportunity to see the natural wonder from a variety of perspectives. You'll start by crossing the Tancredo Neves Bridge before boarding a train that will take you to the park's upper and lower circuits, both of which include walkways leading to the top of the falls.

Next, you'll venture into the Atlantic Rainforest, one of the world's most ecologically diverse regions, with your very own private excursion guide and four-wheel-drive vehicle. The misty canopies that shelter the forest are home to a plethora of mammals, reptiles, and amphibians, including golden lion tamarinds, woolly spider monkeys, maned three-toed sloths, red-tailed parrots, and the elusive and endangered jaguar, among thousands of indigenous plants and species.

Following an incredible adventure through Argentina, it's time to begin your journey back home. Once you've checked out of the hotel, you'll be met by your driver and transferred to the local airport before departing to Buenos Aires. You'll spend one final night at Nuss Buenos Aires Soho before continuing on to the UK.