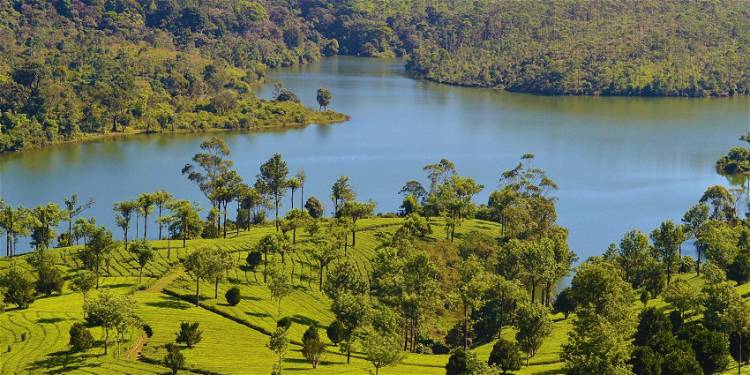 Discover one of the most spectacular regions of southern India on this all-encompassing 12-night itinerary showcasing the tropical beauty of Kerala. Begin with a luxury stay in the port city of Kochi before retreating to the serenity of rural Kerala, learning about the local way of life, touring the beautiful natural scenery and spotting wildlife. Explore the region via its famous backwaters, best traversed on a luxury houseboat, and conclude with a rejuvenating beach break on the golden sands of Marari Beach.

Your itinerary begins in the port city of Kochi. Upon arrival, you'll be warmly welcomed by your representative and transferred to your accommodation for the next two nights.

Set on a historic boatyard overlooking docile waters, Brunton Boatyard is a charming Victorian-style boutique hotel occupying a prime location within Kochi. Beautiful, heritage-inspired accommodations overlooking the ocean, a magnificent garden, an on-site restaurant serving regionally-inspired food, and an Ayurvedic spa are just a few of the hotel's outstanding features.

Spend your first evening in Kochi admiring one of the city's spectacular sunsets on a mesmerising cruise through the calm waters of Kochi Harbour, accompanied by the sound of rustling palm trees and seagulls, while watching local fishermen bring in the day's haul.

The following day, you'll embark on a private tour showcasing the city's rich history and multicultural heritage, beginning with a visit to Mattancherry Dutch Palace, a museum displaying the riches of Cochin's former rajas, before touring the Jewish Quarter. Next, you'll tour the city's Portuguese architecture, notably St. Francis Church, as well as the famed Chinese Fishing Nets, a staple of Chinese influence.

Later that evening, you'll enjoy one of the region's most enthralling traditional dances at a Kathakali Show, a fascinating and unique mode of storytelling employing the use of colourful make-up and striking masks and costumes.

It's time to bid farewell to Kochi as you check out of your hotel and meet your driver for a transfer to your next accommodation located deep within Kerala's rural areas.

Engulfed by tropical forestry, Dewalokam Homestay is an authentic Keralan retreat offering guests an immersive and authentic stay within this rural corner. Throughout your stay, experience the warmth of Kerala's local communities, indulge in regional cuisine crafted using homegrown produce, relax in the freshwater pool and rejuvenate with a traditional yoga session.

Spend your first morning at the retreat observing the canopies and identifying the rare birds that call the area home, including endemic species like the Malabar Grey Hornbill, while lounging on a bench by the river.

View the forests from a different perspective on a bamboo rafting excursion along the river, a captivating experience sure to inspire awe, made even more spectacular by the natural symphonies of the forest and sightings of rare wildlife.

Spend the remainder of the day observing agricultural practices on the farm as the farmers harvest produce, tap rubber trees and tend to the growing vegetation - an engaging insight into daily life for much of the population of Kerala.

Prepare to discover another rural corner of Kerala as you check out of the hotel and meet your driver for a comfortable transfer to the quiet town of Munnar.

Reminiscent of an English cottage, Ambady Estate resides amidst the rolling hills of Parvathy Hills within the Sahya rainforest. Your luxurious cottage at Ambady Estate features warm and spacious rooms as well as a private garden with a view of the surroundings, making it the ideal place from which to take in the tranquilly of the area.

With a visit to the Tea Museum, you'll learn about the region's famed tea and enjoy a thorough educational presentation on how the colourful leaves are processed while hearing the inspiring tales of the remarkable people who established this thriving plantation town.

In the evening, you'll take part in an informative and engaging cooking class where you'll learn about the unique ingredients and complex cooking techniques that form the wonderful flavours of authentic Keralan cuisine before settling down and tasting the flavours for yourself.

The following morning, you'll embark on a hike across the the ethereal hillside that surrounds Munnar, an experience sure to inspire awe as you continue along a ridge that offers phenomenal panoramic views across Munnar's idyllic, undulating landscape. After your trek, you will visit the home of a local tea picker and enjoy a replenishing cup of Munnar tea before returning to your hotel.

Enjoy a delightful breakfast at the cottage before meeting your driver for a four-hour journey through the verdant landscapes toward your next destination, Periyar National Park.

Located in the highlands of Periyar, Spice Village is an enchanting, rustic-style retreat characterised by a distinctive tribal village design with thatched room accommodations interspersed with exotic trees. Providing an immersive yet luxurious stay in this remote corner of Kerala, the retreat boasts a large pool, lively dining hall and unparalleled access to the surrounding nature.

Spend your first evening at the resort watching a fascinating display of the age-old sword-and-shield combat technique known as Kalaripayattu, the oldest martial art in India.

Next, you'll observe some of the local wildlife on a boat ride across the tranquil waters of Periyar Lake, an artificial lake fed by Kerala's longest river: the Periyar River. Flanked by magnificent scenery, the lake provides water for local wildlife, attracting numerous species to its banks, including Asian elephants, Indian bison, sambar deer, four species of primate, and over 200 bird species.

On your final day in Periyar, you'll embark on an immersive morning trek through the surrounding jungle. Led by a local ranger, the trek offers fantastic opportunities to encounter the fascinating wildlife that reside here, such as lion-tailed macaques, sambar deer, Indian giant squirrels, and even wild boar.

Following an incredible time in Periyar, it's time to spend some time exploring Kerala's backwaters. Once you've checked out of the hotel, you'll be greeted by your driver and transferred to your next destination, Alleppey, where you'll board a houseboat - your accommodation for the next night.

Explore Kerala's enchanting backwaters aboard Spice Coast Cruises Houseboat, a luxury vessel featuring warm and spacious interiors with a separate bedroom, outdoor deck, and small dining area. Throughout your journey, you can anticipate panoramic vistas of the beautiful tropical scenery at every turn, whether you're dining on authentic regional cuisine on the outdoor deck or relaxing in the suite.

Enjoy a relaxing breakfast aboard the houseboat before disembarking and meeting your private driver for a road transfer to picturesque Marari Beach.

Marari Beach Resort takes great inspiration from its regional heritage, an enchanting coastal retreat, with its thatched-roof cottage accommodation designed in harmony with the tropical atmosphere. Spend the final few nights of your adventure here lounging upon the golden sand beach, dining at the three on-site restaurants and rejuvenating at the Ayuverdic spa.

Throughout your stay, we recommend taking advantage of the array of experiences on offer at the resort, including an invigorating yoga session led by the resort's Ayurveda therapists and a nature walk through the pristine ecosystem around Mararikulam, home to a diversity of species, such as butterflies, frogs, birds and hundreds of plant species.

Day 14
Fly from Kochi to UK

Following an incredible adventure across Kerala, it's time to begin your journey back home. Meet your driver one final time for a transfer to the local airport before departing back to the UK.