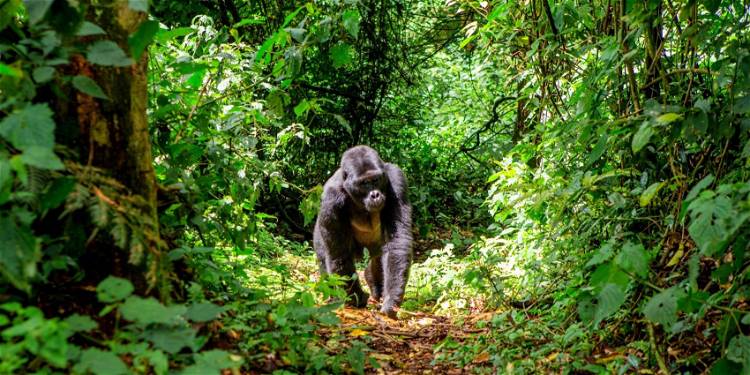 Experience gorilla trekking and a safari in the Serengeti on this 8-night luxury tour to Rwanda and Tanzania. You'll begin in Kigali before venturing to the Volcanoes National Park where you'll have the opportunity to encounter mountain gorillas and golden monkeys. Afterwards, you'll embark on exclusive game drives to spot some of Africa's Big Five.

Upon arrival in Kigali, you'll be greeted by a private driver who will transport you to your accommodation for your first night: Kigali Marriott Hotel.

Ideally located in the heart of the city, Kigali Marriott Hotel is a luxurious, contemporary-style hotel offering accessible links to some of Kigali's most notable attractions, including the Rwanda Art Museum and recreational sites such as shopping malls and a golf course.

The largest city in Rwanda, Kigali is known for its rolling hills, vibrant nightlife, and traditional craft village.

Following an introduction to Rwanda in Kigali, it's time to move on to your next destination and venture out into the Rwandan wilderness. Once you've checked out, you'll be met once again by a private driver who will transport you to the breathtaking Volcanoes National Park.

Nestled amidst lush meadows on the edge of the Volcanoes National Park, Singita Kwitonda Lodge is an exclusive lodge boasting spectacular views of the Sabyinyo, Gahinga and Muhabura volcanoes. Crafted using natural materials and adorned with rustic-style decor, guests can expect luxurious interiors and exceptional service.

Inhabiting dense, mountainous forests at altitudes of 8,000 to 12,000 feet, the mountain gorillas of the Volcanoes National Park are undoubtedly one of the most fascinating wildlife populations of the region. Elusive and intriguing, the gorillas can only be reached with the help of an expert guide who will accompany you as you trek through the ancient forest canopies to locate the gorilla nests. With insight from your guide, you'll have the opportunity to encounter these magnificent creatures in their natural habitat, observing their unique behaviours and interactions.

Home to another fascinating species of primate, the Volcanoes National Park also supports a healthy population of golden monkeys, a rare species that are endemic to the Virunga mountain range region. Residing in bamboo forests that lie at the base of the volcanoes, these monkeys are known for their complex social hierarchies and distinctive golden fur.

Day 6
Fly from Kigali to Serengeti

It's time to trade to ancient forests for sprawling plains. Once you've checked out of the lodge, you'll be met by a private driver who will transport you back to Kigali in time to catch an international flight to your next destination: Tanzania. Upon arrival at Grumeti Airport, you'll be transported to the Serengeti where you'll be met by camp guides and embark on a game drive through the park towards your lodge.

Situated within a 350,000-acre private reserve, Singita Faru Faru Lodge is a breathtaking luxury lodge residing in the heart of the northern Tanzanian wilderness. Set in front of a busy waterhole, the lodge offers striking views of the Serengeti and incredible opportunities to witness passing wildlife from the comfort of your room.

Located within the Grumeti region, a remote and exclusive corner of the Serengeti, the lodge offers visitors the chance to venture out on game drives away from the busy crowds. You'll embark on a series of expert-led game drives across the park where you'll encounter the awe-inspiring wildlife populations that inhabit the region, including cheetahs, leopards, lions, buffaloes, elephants and hyenas. Depending on the time of year you travel, you may even have the opportunity to witness the annual Great Migration, a remarkable natural event the region is famed for.

Following an unforgettable adventure gorilla trekking in Rwanda and game drives through the Serengeti in Tanzania, your journey has come to an end. You'll depart from a local airstrip towards Kilimanjaro International Airport where you'll catch a connecting flight back to the UK.