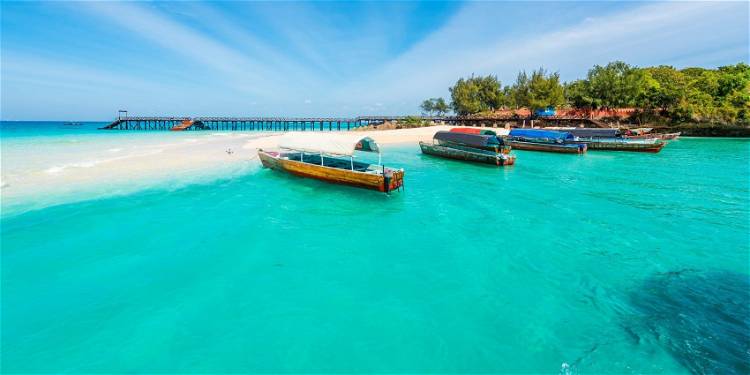 Discover stunning landscapes and rare wildlife on this dynamic 11-night itinerary across Tanzania. Embark on a thrilling wildlife tour through the Ruaha National Park and Selous Game Reserve and encounter some of Africa's most iconic wildlife, including lions, leopards, elephants, giraffes and more. Conclude your adventure with a beach getaway to the dazzling beaches of Zanzibar, located in the Indian Ocean.

Your East African adventure begins here. You'll depart from the UK for Dar es Salaam, with a brief stopover in Doha. Once you've arrived, you'll be greeted by a representative from your accommodation who will transport you to your camp.

Elevated above the banks of the Ifuguru River, Kigelia Ruaha is a luxury camp characterised by a classic safari-style design. Ideally located in the Ruaha National Park, the camp provides unrivalled accessibility to this renowned wildlife destination with a variety of explorative excursions on offer.

Ruaha National Park is the largest national park in East Africa, spanning 20,200 square kilometres of wildlife-rich plains and rivers. A game drive through the park will take you past herds of elephants, Cape buffaloes, kudus, sable and roan antelope, as well as larger predators like lions, leopards, cheetahs, and the rare African wild dog. You'll travel through sprawling savannahs, forested areas, and rocky escarpments with an expert guide to maximise your chances of spotting wildlife.

You'll explore the pristine landscape more intimately on a guided trek through the bush, providing the opportunity to immerse yourself in the untamed wilderness of the region, encountering smaller fauna such as reptiles, shrews, bats and over 500 bird species along the way.

After an awe-inspiring introduction to Tanzania in Ruaha National Park, it's time to move on to another of the country's incredible wildlife destinations, the Selous Game Reserve. Once you've checked out from the camp, you'll be transferred to the local Msembe airstrip and depart to Kiba Airstrip. When you arrive, you will be greeted by a representative and transferred to your next accommodation.

Sand River Selous is an exclusive luxury lodge nestled on the banks of the tranquil Rufiji River, boasting elegant and spacious accommodation with breathtaking, awe-inspiring views of the river and surrounding plains. Providing unrivalled comfort and luxury, you can spend your time lounging by the pool and unwinding on your private deck while watching numerous species of wildlife cool off in the river.

Designated as a UNESCO World Heritage Site in recognition of its diversity of wildlife and unspoilt natural landscape, the Selous Game Reserve is one of few wildlife destinations where travellers can experience both land and river safaris. During your stay in the region, you'll embark on various excursions showcasing a myriad of incredible species. Beginning with an expert-led game drive, you'll spot some of the continent's most iconic creatures, including lions, elephants, giraffes, hartebeests and buffaloes.

On a walking safari, you can track wildlife on foot through the rugged bush, undisturbed forests, glistening floodplains, and lakes teeming with water-dwelling creatures like crocodiles. You'll be able to venture out at various times of the day, including early morning, afternoon, and evening, when the plains are illuminated by the golden hue of the sunset.

View the reserve from a different perspective on an enthralling river safari. A hotspot for wildlife, on this tour you'll witness bloats of hippos frolicking in the river, elephants cooling off by the river banks, Nile crocodiles peering above the surface and various bird species circling the skies above you.

Following a wild adventure across Tanzania's savannahs, it's time to travel off the coast to your next destination. Once you've checked out from the lodge, you'll be transferred to the local airstrip and depart to your Zanzibar.

Residing on a cliff overlooking the Indian Ocean, Zawadi Hotel Zanzibar is a glamorous hotel exuding an atmosphere of barefoot luxury with spacious villas adorned with neutral interiors, floor-to-ceiling windows and seamless beach access. Reinvigorate after your safari adventure with a massage performed on your own private deck and indulge in the authentic taste of Zanzibar at the hotel's 3 exceptional dining venues.

Explore the archipelago's crystalline waters on a range of exciting adventures, from drifting on a kayak in the company of the Indian Ocean breeze to a competitive paddle boarding ride. Zanzibar's clear seas are ideal for a relaxing ocean excursion. Dive into the warm waters and discover the thriving world beneath the surface with untouched coral reefs teeming with exotic marine life such as barracuda, red snapper, Kingfish, green and hawksbill turtles, and dolphins.

If time allows, visit the Jozani Forest Reserve, a rich landscape of tropical mangrove forests, salt marshes, and a diverse range of flora species. It is here that you will be able to learn about Zanzibar's unique ecosystems and endemic wildlife species, such as the red colobus monkey, Jozani frog, and various bird species.

Day 13
Fly from Zanzibar to UK

It's time to start your journey home after an incredible wildlife adventure across Tanzania's golden plains and an unforgettable beach holiday in Zanzibar. Upon check-out of the hotel, you'll be met by your driver and transferred to the local airport for your flight back to the UK.