The Best of Chile & Easter Island 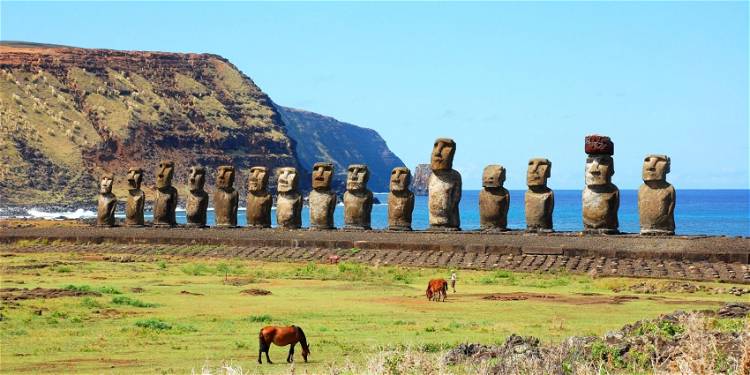 The Best of Chile & Easter Island

Discover the extraordinary wonders of Chile and Easter Island on this 12-night all-encompassing itinerary. Begin with a captivating luxury stay in the heart of Chile's Atacama Desert, the driest non-polar desert on the globe, before venturing off the mainland for an enchanting visit to one of the country's most iconic monuments in the enigmatic Easter Island. Conclude your holiday with an exploration of the untamed wilderness of Chile's Patagonia's Torres del Paine National Park.

Your adventure across Chile begins in the capital city of Santiago. Upon arrival from the UK, you'll catch a quick connecting flight to Calama, located in the country's Antofagasta region. Once you've landed, you'll be met by your representative and transferred to your accommodation.

Situated within a sprawling 17-acre estate in San Pedro de Atacama, Explora Atacama is a secluded luxury retreat boasting charming, rustic-style accommodation inspired by the traditional abodes of the desert's indigenous communities. The ideal base from which to explore the region's surreal beauty, the exclusive retreat boasts everything you may need to relax throughout your stay, including a serene spa and an exceptional dining venue.

Begin your exploration of the Atacama Desert on an engrossing hike across the varied terrains of volcanoes, geysers, salt flats and blue lagoons that populate this spectacular region of Chile. Designed to highlight the unrivalled grandeur of the desert, this excursion will see you pass through the most notable locations, from steep mountainsides dusted with exotic fauna and glistening lagoons enlivened by pink flamingoes to the breathtaking Mars Valley, a landscape of soaring rusty mountains unlike anywhere else on the planet.

Later that evening, you can take advantage of the resort's enviable location in one of the least light-polluted regions in the world and discover the constellations with an entrancing stargazing session. Taking place in the lodge's on-site observatory, the activity will be both educational and engaging, beginning with a briefing of the basic concepts of the universe before you step up to the telescope and marvel at the mesmerising constellations that hang above the desert.

The following day, you'll explore the Atacama from a different perspective on an exciting cycling tour. Paved with a myriad of routes, each showcasing mesmerising vistas, the desert landscape is in no shortage of awe-inspiring sights. Witness the diverse wonders of the desert on a ride along the route to Piedra de la Coca, a rock site etched with ancient petroglyphs, beginning with an ascent up to the Salt Mountains, a stunning terrain of white-dusted mountains before continuing through a historic tunnel towards the dry riverbeds of Llano de Paciencia.

Next, you'll visit Valle de la Luna, undoubtedly one of Chile's most famed natural locations, renowned for its alien-like terrains of red mountains carved by millennia of erosion. Feel immersed in the dramatic landscape on an expert-led trek amidst the magnificent mountain range before finding a comfortable vantage point to view the location in all its majesty.

Day 5
Fly from Calama to Santiago

Spend your final morning at the lodge indulging in a rejuvenating breakfast before meeting your driver for a transfer to the local airport. From there, you'll embark on a short flight via seaplane to Santiago. Upon arrival, you'll be greeted by your driver and transferred to your next hotel.

The Singular Santiago is an exquisite luxury hotel located in the vibrant Lastarria neighbourhood of Santiago's historic centre. The hotel offers opulent accommodation characterised by a classical yet refined design, outstanding world-class facilities, and an exceptional dining venue that showcases the flavours of Latin America.

Make the most of your stay in Santiago and add a tour of the city to your itinerary. Flanked by the Andes to the east and the Chilean Coastal Range to the west, Santiago's modern skyline is beautifully contrasted against a striking backdrop of snow-capped mountains. Teeming with remnants of the country's Spanish colonial past, such as Plaza de Armas, which homes two of the city's finest neoclassical landmarks, 808 Palacio de la Real Audiencia and the 18th-century Metropolitan Cathedral, a tour of the city provides a vivid insight into the country's rich and varied past. Spend the day soaking up the steep history of this rich city before spending the night browsing Santiago's fantastic culinary scene and nightlife.

Once you've checked out of the hotel, you will be met by your driver and transferred to the local airport for your flight to Easter Island over the Southeastern Pacific Ocean. Upon arrival, you will be greeted by your representative, who will arrange for a comfortable transfer to your three-night stay.

Sitting atop a small hill outside Hanga Roa, Explora Rapa Nui is a warm luxury hotel characterised by a modern design elevated with touches of natural materials. Set within a circular exterior, each space at Explora Rapa Nui has been meticulously designed to maximise views of the tranquil natural surroundings. When you're not out exploring the wonders of Easter Island, you can relax at the hotel's holistic spa or indulge in local cuisine at the on-site restaurant.

Intimately explore the intriguing volcanic landscapes of Rapa Nui on an inspiring hike taking you through the island's most fascinating locations. Begin with a tour of the Papa Vaka, an archaeological complex that contains a number of ancient petroglyphs, before continuing onwards to Hotu Iti, a verdant terrain dotted with archaeological remains, rock gardens, and traditional farming sites. Next, you'll enter the island's iconic site of Ahu Tongariki, home to the fifteen moai statues that are known around the world for their impressive stature. A once-in-a-lifetime sight, the statues are unlike any attraction on Earth, as well as being the heaviest to ever be erected.

Later that afternoon, you'll embark on an expert-led adventure through the various sea caves that reside at the feet of the island, enjoying marvellous views of the dramatic cliffs and the Rano Kau crater and Motus islets along the way. Disembarking from Hanga Roa's cove, you'll enjoy a leisurely ride before venturing into the waters for an enthralling snorkelling excursion around the islets. Boasting unrivalled visibility, the waters are teeming with an array of exotic marine life including blue-striped orange tamarin and yellow-longnose butterflyfish, as well as endemic species such as Easter Island butterflyfish and the Easter Island angelfish.

Explore Rapa Nui at your own pace on an incredible cycling excursion across the island's various enchanting landscapes. Paved with a variety of trails, you can choose to view the features of the island's you're most keen on visiting. Immerse yourself in more of the island's rich history with a ride up to Terevaka Volcano, which will reward you with panoramic vistas of the island, before continuing up to Ahu Akivi, an archaeological platform of seven moai and the only moai found on the island that faces the ocean.

After your cycling adventure, you'll get back on your feet for a hike through the more rugged terrain. Beginning in Ahu Tahira, a spectacular site comprised of colossal rocks that demonstrates the ancient population's remarkable stonemasonry skills, the journey descends steep cliffs towards the edge of the vast Rano Kau volcanic crater. You'll walk around the rim until you reach Orongo, an ancient ceremonial village where the Tangata Manu competition was held.

Following a riveting exploration of Easter Island, it's time to head back to the mainland. Once you've checked out of the hotel, you'll be transferred to the local airport for your flight to Santiago. Upon arrival, you'll be transferred back to The Singular Santiago for a one night stay before returning to the airport to depart to Punta Arenas, the gateway to the Chilean Patagonia. Once you've arrived, you'll be greeted by your driver for an approximately five-hour journey through the scenic landscapes of Chilean Patagonia and Torres del Paine National Park towards your accommodation.

Perched above the serene shores of Lake Pehoé, Explora Patagonia is a charming luxury lodge occupying a prime location in Chile's Patagonia, set amidst towering snow-capped mountains and a gorgeous waterfall. Boasting cosy accommodation adorned with wooden interiors, wall-to-wall windows and classic furnishings, the lodge is the ideal setting to experience the untamed beauty of this wild region.

Your journey through Chile's Patagonia begins with an exhilarating hike through Torres del Paine National Park, one of the country's most spectacular natural areas, which encompasses mountains, glaciers, lakes, and rivers. The park is paved with a number of hiking trails, each offering spellbinding vistas, from the horn-like granite peaks of the Cuernos del Paine to the turquoise waters of Lake Nordenskjöld.

The following day, you'll visit the majestic Grey Glacier, a colossal body of ice fed by The Southern Patagonia Ice Field, one of the world's largest ice masses. You'll depart from the lodge and catch a catamaran ride along the crystalline waters of Lake Pehoé, disembarking at the Paine Grande hotel for a short walk towards the Grey Refuge. Halfway up the ascent, you will be able to spot the Grey Glacier, continuing down onto the beach of Lake Grey to board a boat that will take you up close to the soaring ice walls of the glacier.

Once you've checked out of the hotel, you'll enjoy a scenic road transfer back to the airport and board a flight back to Santiago. From there, you'll catch a quick connecting flight and continue onwards to the UK.