The Best of Uganda 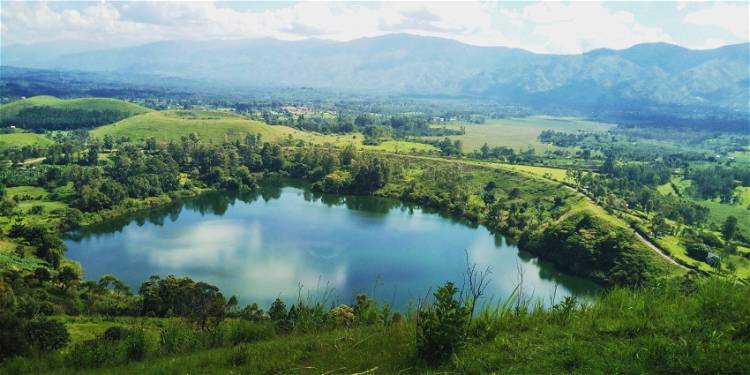 The Best of Uganda

Discover why Uganda is known as 'the Pearl of Africa' on this immersive 8-night itinerary. Begin in the idyllic city of Entebbe, located in the embrace of the mighty Lake Victoria, before travelling north to the scenic Murchison Falls National Park for a dynamic adventure of wildlife and nature tours. Encounter chimpanzees in their natural habitat in the evergreen forest of Kibale National Park before visiting the primeval Bwindi Impenetrable Forest, home to almost half of the world's mountain gorilla population.

Your journey into Uganda begins here. Upon arrival, you'll be met by a private driver who will transport you to your accommodation the night.

Situated on a serene hillside, Karibu Guesthouse Entebbe is the first stop on your itinerary. Boasting spacious rooms and an on-site spa, the hotel offers travellers everything they may need to relax and revitalise after a long flight. Ideally located near the incredible Lake Victoria, guests can spend the day relaxing on a pristine beachfront or enjoying a delightful boat ride on the lake.

During your stay at Karibu Guesthouse Entebbe, you can enjoy looking out for the array of bird species that frequent the hotel's luscious gardens. Offering prime conditions, you'll find over 36 incredible species circling the garden, from the crowned Hornbill and palm-nut vulture to the African Grey parrot and Ross's Turaco.

If time allows it, be sure to pay a visit to the nearby Mabama Swamp, home to the endangered Shoebill stork, a rare bird species famed for its unique appearance and large size.

Day 3
Fly from Entebbe to Bugungu

Following your night stay in Entebbe, it's time to move onto the next stop on your itinerary. You'll be transported to Entebbe International Airport and depart to your next destination, Bungungu. Upon arrival, you'll be met by a Primate Expeditions representative who will transport you to your accommodation for the next three nights.

Situated within the Murchison Falls National Park, Nile Safari Lodge is an exquisite luxury lodge nestled along the banks of the River Nile. Offering spacious Banda accommodation adorned with contemporary-style interiors, your time at the lodge will be nothing short of spectacular, with beautiful views of the river to be enjoyed from the comfort of your own private deck.

During your stay at the lodge, you'll embark on a thrilling game drive through the Murchison Falls National Park, Uganda's largest. Spanning a total area of 3,840 sq km, the park is home to a plethora of incredible wildlife, including four of the Big Five. You'll have the chance to intimately encounter these magnificent creatures as they roam against breathtaking backdrops of scenery, from roaring waterfalls and green rolling hills to sprawling savannahs and the thunderous River Nile.

Traverse along the world's longest river on an immersive boat ride on the unmissable River Nile. Observe herds of elephants as they cool off by the river banks, marvel at fierce hippos as they frolic in the rugged waters and spot elusive Nile crocodiles lurking beneath the surface before trekking up to the top of the mighty Murchison Falls for glorious views of the park.

Day 6
Fly from Bugangu to Kasese

After your stay in the Murchison Falls National Park, it's time to continue your exploration of Uganda. Once you've checked out at the lodge, you'll be transported back to the local airstrip for a short flight to Kasese. Upon arrival, you'll be met by a lodge representative who will transport you to your accommodation.

Located on a hilltop overlooking the breathtaking Lake Nyinambuga, Ndali Lodge is a quaint colonial-style retreat located near the border of the Kibale National Park. Boasting warm interiors and stunning views of the lake, the lodge provides the perfect base to venture out from and explore the awe-inspiring surroundings.

Characterised by diverse terrains of tropical forestry, woodlands and evergreen forest, the Kibale National Park is renowned for cradling the largest chimpanzee population in all of Uganda. During your stay at the lodge, you'll have the once-in-a-lifetime opportunity to venture out into the park and witness these endangered primates in their own natural habitat. An expert guide will accompany you on your trek, helping you track and spot these incredible creatures as they dangle from luscious canopies overhead.

Following a wondrous experience in the Kibale National Park, it's time to encounter more wildlife in another region of Uganda. Once you've checked out at the lodge, you'll be met once again by a private driver who will transport you to your next destination, the Bwindi Impenetrable Forest Reserve.

Nestled amidst dense forestry, Bwindi Lodge is an extraordinary luxury retreat benefitting from spectacular views of the primaeval Bwindi Impenetrable Forest. Offering uncompromising luxury in the heart of one of Uganda's most sought after destinations, guests at the lodge can anticipate a comfortable yet immersive experience. Enjoy marvelling at the surrounding forestry from the comfort of your private deck, where you may even have the chance to spot the family of gorillas that frequently visit the lodge grounds.

Complete your all-encompassing wildlife exploration of Uganda with a spectacular gorilla trekking excursion through the mystifying Bwindi Impenetrable Park. An expert guide will accompany you as you traverse through dense forestry, helping you track and locate these magnificent primates. Marvel at their fascinating behaviours and observe their unique interactions in the setting of their own natural habitat.

Day 10
Fly from Entebbe to UK

Following an unforgettable time in Uganda, the time has come to return to the UK. Once you've checked out at the lodge, you'll be met one last time by a private driver who will transport you to the local airstrip where you will catch a flight to Entebbe. From Entebbe, you'll catch a short connecting flight to Ethiopia before continuing onwards to the UK.