The Highlights of India 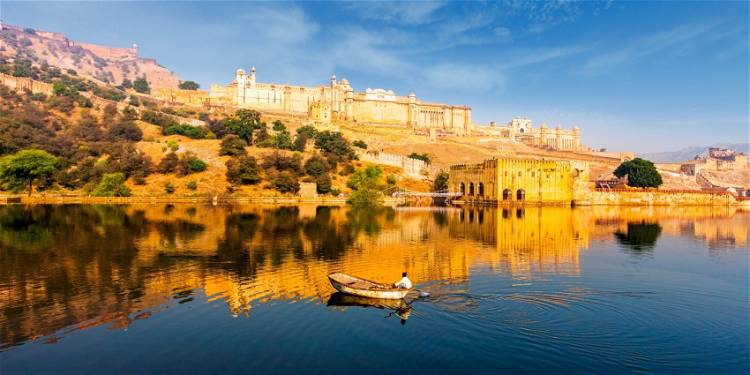 The Highlights of India

Discover the vast and vibrant beauty of India on this all-encompassing 14-night itinerary. Begin in the bustling capital city of New Dehli before venturing to the city of Agra, home to the magnificent Taj Mahal. Travel to the breathtaking region of Rajasthan and encounter incredible wildlife, including the iconic Bengal tiger. Marvel at hybrid Mughal, European and Rajput architecture in the exquisite city of Jaipur before travelling south for an intimate exploration of the tropical region of Kerala.

Welcome to New Dehli, the starting location of your India tour. Upon arrival, you'll be met a private driver who will transport you to your accommodation for the next two nights.

Set with six acres of manicured gardens, Taj Palace is a modern luxury hotel benefiting from remarkable views across the lush surroundings. The hotel boasts a selection of restaurants and bars, an outdoor swimming pool, and a luxurious spa.

During your stay in New Delhi, you can opt to embark on a full day tour of the city, including visits to Humayun's Tomb and Qutub Minar, and concluding with a rickshaw ride through Old Delhi.

Delhi's history is rich and varied, with the city having been the capital of two major empires between the 13th and 19th centuries: the Delhi sultanate and the Mughal Empire. This fascinating and diverse heritage, many remnants of which still remain today, means the city and surrounding area is a treasure-trove for history enthusiasts across the globe, with the city boasting three UNESCO World Heritage Sites: the Qutub Minar, Humayun's Tomb, and the Red Fort.

You'll be collected from your hotel in the morning and transferred by private driver to Agra, where you will spend the next night.

Set across 24 beautiful gardens, ITC Mughal, A Luxury Collection Hotel Agra is a luxury property situated in near proximity to the Taj Mahal. The hotel boasts a sanctuary-style wellness centre, a selection of restaurants and bars, and a spacious outdoor swimming pool.

During your stay in Dehli, you'll travel to the city of Agra, home to the magnificent Taj Mahal, a UNESCO World Heritage Site and India's most prominent monument. A must-see on any India itinerary, the mausoleum is an architectural masterpiece like no other, crafted with pure white marble and adorned with exquisite fine detail.

Following your visit to the Taj Mahal, you'll travel a short distance to another famous landmark, the historical Agra Fort. Built in the 16th century, the remarkable structure is famed for its striking appearance and grand size, constructed using only red sandstone and spanning a total area of 380,000 m2.

After an incredible time in Agra, it's time to continue your exploration of India. Once you've checked out of your hotel, you'll be met by a local representative who will transport you to the next stop on your itinerary.

Located in the Rajasthan region, The Oberoi Vanyavilas Wildlife Resort is an opulent hotel situated on the edge of the Ranthambore National Park. Inspired by the glamour and comfort of royal tents from a bygone era, the hotel offers luxury tented accommodation featuring modern amenities.

Embark on an incredible excursion through the Ranthambore National Park and encounter one of the world's most elusive creatures, the Bengal tiger. Following your tour of the park, you'll be invited to an educational talk held by the hotel's resident naturalist who will explain the journey of each tiger that resides in the park. Famed for its rich biodiversity, Ranthambore National Park is also home to an abundance of other wildlife species, including leopards, hyenas, sloth bears, macaques.

During your time in the region, you'll visit the Dhonk Craft, a pop-up marketplace held by the Dhonk organisation, an initiative that works to provide local communities with craft training and employment opportunities.

Due to low light pollution, Ranthambore offers spectacular stargazing opportunities, which may be seen best from the observation tower of The Oberoi. This fascinating activity is conducted by a team of specialists who will lead you on a tour through the constellations.

Following your riveting exploration of India's wilderness, it's time for a change of scenery. Once you've checked out at the hotel, you'll be met once again by a driver who will transport you to your next destination.

Located in the city of Jaipur, famously known as the "Pink City", The Oberoi Rajvilas is an elegant luxury hotel boasting stunning accommodation inspired by the era of Maharajas. With a myriad of experiences available for guests to enjoy, including a complimentary spice talk taking you through the regions native species, and a peaceful yoga and meditation session, the Oberoi Rajvilas offers an authentic and immersive introduction to this historic city.

Continue your exploration of Indian architecture with a visit to two of Jaipur's most beautiful structures. The Amber Fort, a UNESCO World Heritage Site, houses a selection of buildings of great religious and historical significance, including the ancient temple of Shila Devi and the breathtaking Ganesh Pol gate.

Located in the heart of the Old City, the City Palace is undoubtedly Jaipur's most iconic royal landmark. Entirely composed of marble and granite, the impressive structure is comprised of a complex series of courtyards, gardens and smaller buildings.

Day 9-10
Fly from Jaipur to Cochin

Following your all-encompassing tour of the Golden Triangle, it's time to travel down south. Your driver will transport you to the airport where you'll catch a connecting flight to Hyderabad before continuing to your next stop, the tropical region of Kerala.

Upon arrival in Cochin, you'll be met once more by a private driver who will transport you to your accommodation, the Kumarakom Houseboats. Quaint and spacious, these luxury boats offer the ideal vantage point to intimately explore Kerala as they gently drift down the river, revealing local villages, expansive paddy fields, luscious coconut groves and native flora and fauna along the way.

After a relaxing and immersive experience travelling down Kerala's backwaters, it's time to get back on land. Once you've disembarked, you'll be transported to the coastal town of Kovalam, your final destination in India.

Perched on a cliff edge overlooking the Arabian Sea, Niraamaya Retreats Surya Samudra is a stunning luxury resort designed to optimise the serenity of the beautiful natural surroundings. During your stay, you can enjoy dining at the resort's exceptional restaurants, rejuvenating with a massage at the serene spa and marvelling at the ocean on a gorgeous beach picnic.

When you're not relaxing at the resort, you can enjoy discovering all Kovalam has to offer, from visiting its many gorgeous beaches and undertaking a variety of thrilling watersports to browsing the local markets and visiting the scenic Vellayani Lake.

After an incredible two weeks exploring India, the time has come to begin your journey home. You'll be met by a private driver one last time before travelling to the airport where you'll catch a domestic flight to New Dehli. Once you've arrived in Dehli, you'll catch one more connecting flight to Dubai before continuing onwards to the UK.